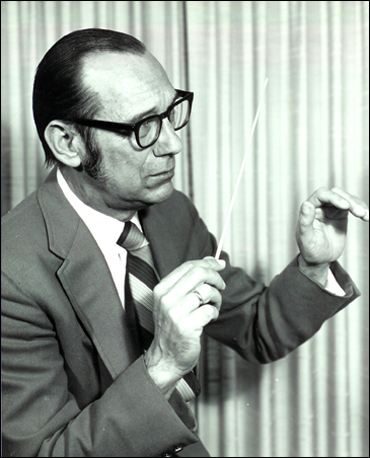 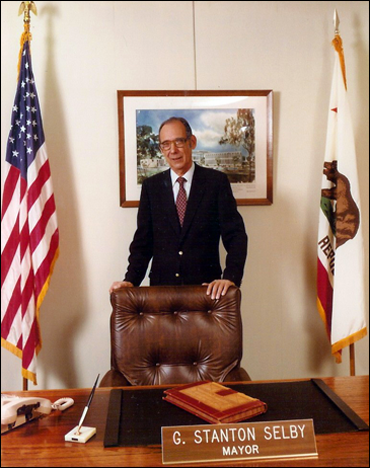 G. Stanton Selby was a composer-arranger, conductor and was the founding Director of the Pomona Concert Band.

He was Professor Emeritus of Mt. San Antonio College, held a Bachelor of Music and Master of Music degrees from the University of Southern California.  Former Mayor of the City of Pomona, and he was also an executive member of the Los Angeles County Music and performing Arts Commission.

Born on August 23, 1920, Stan grew up in South San Francisco with its mixed population of Italians and Portuguese.  He started studying clarinet in grade school.  Surrounded by music, he played in local bands and ushered for the San Francisco Operas establishing his love for great music.

During his college years at San Jose State University, Stan was "Principal Clarinetist" in the concert band while earning spending money playing saxophone in local dance bands.  It was there in the music department in September 1941 that he met Helen.  They were engaged on November 30, 1942 but World War II temporarily put the wedding on hold while Stan volunteered for service in the United States Coast Guard.  On July 21st, 1943, Helen Rees and G. Stanton Selby were married in Riverside.

Following the wedding, Helen and Stan were motivated to continue with their music education.  They left San Jose State and Stan enrolled in the University of Southern California as a clarinet major.  As a clarinet student of Antonio Raimondi, Stan gave his Master's recital July 29, 1947.

Upon graduation Stan got his first job as a music educators in Livingston, California as a High School Director.  Later that year he heard that Mount San Antonio College was looking for a music instructor.  Stan applied and was accepted. 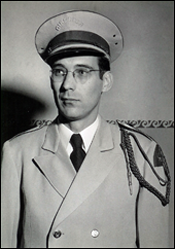 An ad in the Pomona Progress Bulletin notified readers that George Churchill, commander of the local American Legion, was conducting auditions for a director of a band being sponsored by their post.  Stan auditioned for the position and became a director of a small group of 17 to 20 musicians.  The first concert by the Pomona Community Band was held on Sunday, March 14 in Ganesha Park.  The program was free to the public.

Stan's position at Mt. San Antonio College was very successful.  He introduced a series of student recitals by performing with his wife Helen in a Duo Recital.  He would frequently invite students from the college to appear in the Community Band's concerts, providing a wide display of talent.

The City of Pomona decided to build the Ganisha Park Community building, including a performance shell.  It was a home made structure but at least it belonged to the band.  The enthusiastic crowd response encouraged the city to build an improved bandshell adjacent to the rehearsal hall.

As the years passed, Stan's stature grew in Pomona.  The city was looking for a man who was an organizer and a promoter and Stan Selby was urged to run for an opening on the City Council.  He liked politics so well he later ran and was elected Mayor of the City of Pomona.  As Mayor, he continued being the director of the Pomona Community Band.

The band matured into a recognized national treasure.  They were invited to tour Europe and Japan.  The Japanese were pleased to have an American Concert Band visit their country and circulated the news through flyers and the press.  It made little difference if members of the band and members of the audience were unable to converse.  Music, the universal language, allowed communication to came across loud and clear.

His successful format for the Pomona Concert Band was being emulated by his fellow directors.  On November 5, 1995, Stan Selby's was recognized by a Certificate Of Special Congressional Recognition For Outstanding And Invaluable Service To The Community, signed by President Bill Clinton.  On May 29, 2004, The American Legion presented G. Stanton Selby with a Proud World War II Veterans Service To America award.

G. Stanton Selby passed away in November of 2004.  In the shadow of his legacy the band has continued to represent the City of Pomona in concerts thoughout Southern California.